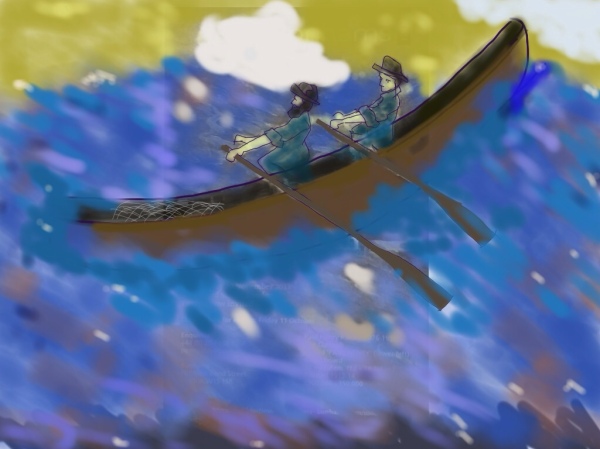 The Sonorities series as it used to be known continues at SARC QUB with some truly outstanding programmes with which new experiences and old in music development can be heard in very unique and useful venues.
From the SARC performance space at Cloreen Park, The Great Hall, Harty Room and seminars at other campus locations there is a vibrancy in the players and playing which is set apart from the manicured bespoke concerts formulated to attract the taste that is relatively as expected.

By creating a diversity of programming which intends to show the music medium in its raw authenticity, sometimes in the abstract, in the free playing there are fewer certitudes except that we return again to the high spiritual place music can take all of us to. Even the hard of hearing, the to ally challenged can benefit somewhere in the cast of the events.

On the platform of the Harty Room the stage was set with Fiddle, Irish Harp and a range of electronic instruments. One very tiny device was a motion detector which Una Monaghan wore in her hand while playing, with the sound arriving and returned via. a speaker cone set on the floor in front of her playing back a treated resonant pattern.

With ease beyond her years Una Monaghan began her own compositions Tubaiste Agustin Taisceadan, One born every minute. Two jigs which sang directly. The first slowish and melancholic, the second accompanied with a repeated melody. Not your usual jigs but fresh as Mountain Dew.

Next came a Harp and Fiddle piece from the Orkneys which was not bossy and the Harp picked out the air entitled Mrs Violet Eunson an apparent memory which was soft and sweet with all the nurtured playing with both instruments took on magically the tonality expected from a traditional island air. A reel, Derrycraig Wood came out dextrously without the hoofer pace associated often with a reel and it carried with the fiddle and coloured midstream.

There are certain musical compositions which you know once heard are unique and of real quality. This was effect had of Namhog.
The name given to an Irish wooden rowing boat.
Without first seeing the notes of the programme the piece conjured images
resonant with this little name the moment it began.
First was Feicim do Thintreach. (Cloud Party) A jig.
It conjured up immediately the launch of a boat. The boat straight and fronting the waves. Topping the first, remaining in place, topping the second wetting and winning a yard until it coasted up onto open sea and onward coasted beyond the shore. Taking the jig out onto its mission on water Una has composed a set of pieces which are intuitively mature and she composed these last year on an educational trip to Maine In the US.
Conversations, rhythms, transition, poise, stretched and reached out as the source sound of the Harp interwoven with the fiddle with electronic accompaniment feeding back into it, settled on the air in the room and captivated the listeners lucky enough to encounter this new fresh expression of Irish traditional music. The middle section, the air Scathan do Shuille (Look in, see out) was gentle, waiting for things to happen, fashioned on simple rhythm and washed like a breeze. It may have been inspired as the programme notes suggest the St Brendan voyage. It as I say capable of standing alone with the listener without hint or prethought as evoking voyage, passage. The journey handed over to small things, like sparse notes, the tight stretch of simple canvas cloth and a wooden sculpted vessel taken to encounter unseen lands.
The tautness of the music is symbolised by the tension of having electronics play back to the players. Music evolving and individual at performance and understood also as a recording piece. The singular gathered sound. Many things can be advanced from the music but principally the music is itself. It symbolised discovery and we as listeners no matter how wrapped between pathos and bathos regard that passage as our own moment of experience.

No matter they were relatively short, 2 and a bit, 3 and a bit and perhaps 4 minutes respectively, they created an astonishing resonance with the addition of digital counterpoint making them all the more settled and unhurried. They were mature reflective developing sounds,turning, waiting and prevailing tones ushered out as a weave of all things. The musicians Una Monaghan and Breige Quinn aware of what they were producing and themselves making discoveries and instant decisions on the evolution of the material. Technically this was demanding and their own anticipation was belied by the simple cast of what was a mesmeric rhythmical effect.
Provoking playing and everything that the series sets out to put together to widen the hearing and provide venturous encounter of new devised material. The reel Cibe ata Caite (Whatever is thrown) was a summation of the Namog piece and it is interesting Una has put these all in the one in order to relate them as parts of each other, as consequences of each other. The former need not speak of other things as those things will establish and recall essences of the former and so it goes. The understanding musically can develop and you have to wonder how much more will be uncovered on this duos musically journey and the further output and composition of Una Monaghan shall be. One thing is clear. There are apparent gifts in the musical meadow and there are higher vistas out there. A very grounded musician from whatever elevation with a delightfully refreshing and instinctive evolutionary feel for the art.

The possibilities were also seen in music composed by Liz Carroll and played by the pair. Nothing overtly formulaic but evoking other things.

A recollection of a session, so important as a combining of all traditions within the sphere, was the finale piece Omos do Coleman for Seamus Begley written by Una Monaghan and Farewell to London. Sesions in space in time now captured and memorised with appropriate sentiment.

Overall the works and playing reminded me of the great exponent of Irish music and a living legend, a force of god and consciously human artist.
Paddy Keenan. His work from the tradition of the pipes and his own rich contribution to the Irish vibe and instinctive mind dwelt memory of the ancient art of music gathering: aside from Seamus Ennis there has been no-one I can think of who has maintained that linear evolving sound of Ireland than Paddy Keenan. He can express the Irish persons heritage through the medium of music as no other and at times on something as simple as a low D whistle.

It sounds like a challenging comparison but there is the same humility and understanding of the vibe and place of music in our lives, only for some labeling purposes Irish music, inherent in Una Monaghan as it is in Paddy Keenan.

A privilege and a pleasure encountered.