The synopsis of The Lobster is one of mating in which our Greek director summons up in two halves basically future environments of firstly a hotel where ‘The City’ encourages singles to go and meet up with prospective partners. Secondly the movie goes outside the hotel to the woods were the romance obstacles unfold. To be without a partner has its drawbacks according to the sisterly Olivia Coleman proprietress and manageress of the hotel. Splendidly four or five star and located in – well imagine Kerry and the palatial Parknisilla near Sneem – and you won’t go far wrong. All lakes and mountains, hillsides, woods empty roads etc.

Colin Farrell is our principal singleton having lost his partner and on checking into the hotel is set 45 days in which to meet his match.
His deadpan black comedy approach is very effective. He even instills a surreal way of speech which is manifest among all the characters here. It is one of perfect annunciation and lightly clipped dialogue. A narration is used in the beginning as a storyteller describing basically their vision of the adventure Colin Farrell has as his leitmotif which as he soon discovers is the nature of adopting a disguise, a guile which will extend his time and chances of success in the mating game. Isn’t that always the way of it! Only to be untruthful in even the slightest way has her a modicum of fatality as a consequence.

Spoilers None
For you to be immersed in the full effect of the film I am NOT going to give you any account of how the title is represented. Instead I will skirt around it by giving some information on the creature itself and other oblique observances. Try as I might I cannot impart a reason to let you know what your in for as this tale is grotesquely and simply bizarre funny and futurist absurdist storytelling.

Identity is ensnared among a rag tag and bobtail of fellow date travellers.
We have the groups of females and males in this hotel who are troubled by finding themselves without a life partner for whatever reason and ‘The City’ functionaries have it as a requirement for the ‘corporate’ good and ease of operation a standard which is in this futurist world a stable norm.

What has become of us? The future asserts we need in pursuit of happiness something other than the Jeremy (Ca) Bentham epoch of the best public policy is that producing the greatest happiness. Private behaviour need be of the right moral act and that which produces the most happiness for the people it affects. The nineteenth century enlightenment. At another extreme is the shatter zone philosophy of Schoenberg that ‘we suffer through being born’ nothing is availing to happiness.

This film features for reasons that will become quickly apparent, legions of the animals of the type – perhaps the writers inspiration, the arc of the story (sic) – ‘the animals went on two by two’ – no similarity other than that! – appear throughout in their settled comfort or habitat of the Kerry skies and hillsides. Frequently visitors too. They appear as a tableau of a menagerie of beings, reminders of our companion creatures ever present unless carelessly extinction is abroad or in house.

Merits are on the roster of the Hotel lodging. All newcomers are able to extend their stay, and chances of ‘survival’ by joining the group trip to the nearby woods to hunt literally loners or the fringe radicals who somehow have evaded being caught up in the societal dictatorial modes operadi for living a stable existence and seeking and obtaining their own survival.

Partnerships under the circumstances take on a further dimension of dependency beyond the norms of individuality found in all sorts of marriages. Maggie from extras is a female recruit whose habit of offering her ever replenished supply of biscuits on anyone that she is remotely attached to. She also does a line on offering inducements that are off limits in the Hotel and is herself in need of others at a cost she has found appropriate.

The self realizations are mostly visible and the characters adapt rapidly to the situation they find themselves in.
So has the secular socialism failed, the hubris of philistine culture prevailed, the oedipus of anxiety angst driven corrective religion and pacifism vanished? The welter of happiness is the prisoners dilemma of co-operation.

We are not allowed to see ‘the City’ dwellers lives. We are able on a few occasions to see their homes. A visit to Mama and Papa for one reveals a seemingly (blissfully perhaps?) couple who play classical guitar and are entertainers with felicity of Spanish historically reference times gone by music. The same meeting finds a couple inspired to display their bond slightly beyond social mores.

The snap bite of death is ever present and comes in many forms.
Expect blood, murder, dismembering. Expect some scenes which are heartfelt and absorbing as empathy strange as it may manifest is released.

In the throes of Colin Farrell’s (David’s) survival we are introduced to the nameless woman narrator, that is to appear in the second half all trashed up but glitzy in attractiveness Rachel Weiss.
At first, Weisz’s character tells us David’s story, then she becomes a central part of the story alongside David. This is strongly lifting the level of the films sharp narrative. The development of the revealing personality divisiveness is resolved in true Romeo and Juliet determined belief in a partnership no matter how it has evolved. Even exchanges of gifts of a kind!

My second half review filling diatribe
Daliesque (Salvador)
How do you like your decapod? Afresh from the saline and dull green and alive. A creature with a life in the sea. One large pincher for grabbing another for crushing. This extraordinary creature might be seen as a wonder of our varied existence and plainly not designed for eating though it has gained the hostility of being edible being boiled alive.
A worse death cannot be imagined. How surreal is beauty if not alien?
A concept of beauty I am now inclined to believe is the lobster. An astonishing machine for living as we are. Who wants t o be a Lobster seems to be the surreal connect and as Dali reflected they make a good representation as a telephone. Something sublimely surreal is they live to be 100 and if you extrapolate that in crustacean years does that make them thousands of years old and they circuit the globe avoiding lobster pots?
Blue blood allegedly? I once took from a wedding list a set of Lobster cutlery as their gift of choice and posh food was the entrée for a menu featuring quails eggs and a stunning wedding feast. The cutlery I eschew as apparatus, as I cannot conceive the thought of the killing of this creature no matter how centuries old the tradition has become as being necessary.

Suspend all concepts of love
Out of the director of Dogtooth, Yorgos Lanthimos mind came a concept for a surreal near future world which has gathered in a stellar cast of inhabitants.
Rachel Weisz, sans husband Daniel Craig, chooses her roles very carefully and has been known to buy up rights to books such as Thirty Girls which is a story about the Ugandan resistance army in the vien of realism she found in 2006 movie The Constant Gardener which gained her an Oscar.
Stunningly attractive and far from the glamourous image she has to convey an ordinariness and moderately staid business like character here.

It is asking a lot as a scenario and it asks if love is found when you overcome self inflicted ideas on the obstacles or after you breakdown those self inflicted obstacles. Rachel is known as Short Sighted Woman and plainly has a physical handicap to overcome. People change in appearance over their lifetime so maybe she has no hang ups on looks. If only that were true were would …
Kindly she is dealt sufficient sight to discern a little of the concept and make up of her first Romeo. Remote from the New York vehicle she shared a stage last year with husband Daniel and counter point Timothy Spall in Pinters Betrayal this is a surreal set of problems we encounter and unearth.
It is a thriller of take no thought of tomorrow lest we lose the initiative type of thing! Is it about seizing the moments love and trusting in it?

Pop culture cinema and the makers
Take with you to the Cinema the theatrical tapestry of modern film anthropology. From the Daily News reveal of Frank Sinatra caring for and carousing at the table, Marilyn. The cocktail mixers in place, the effervescent Schweppes, with label, Quinine distilled, asking her to come to his futureproofed home at Lake Tahoe and provide the dreams she filled her loneliness with. Or the red carpet on a Sunday, rugby weekend where you would rather be in a warm place watching sporting history unfold if not at the event, rather than standing in black suit and bow tied with your arm on the waist of Kate, she in the fullness of a masterpiece A. McQueen dress which defines glamour and faithlessness.
Or the dreich downpour and walking in the rain to the next moorland scene in an Aussie cagauole and hear in the distance someone shout action.
The reality and unreal juxtaposed as we enter the contrivance of the cinema accepting its twists and turns suspending belief and summoning new ones.
This film will similarly place randomness alongside statis and neither will seem as clear as was once the case. Nor should it be. We have been allowed imagination as a birth right and such is the distinction we want underpinning – otherwise it is dreich.

The soundtrack of the movie is both perfect and annoying. Some songs and classical soundscapes are very effective while other elements are intrusive and snarling. Bring on blue eyes and Polka dots and moonbeams, East of the Sun, begin the Beguine, Poiniana, I fall in love too easily or any song as solitary testimony of the luxury of loves happenstance. 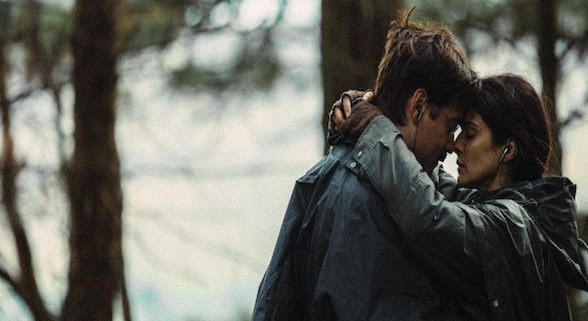 Conclusion ####4
This is a film offering generous helpings of fascinating entwined lives and the surreal interactions are wisely contorted – through the voices and practicality of the language and dialogue – it’s attractive setting in the midst of abundant beautiful landscapes well photographed (Thimios Bakatakis’s) and the modernity of the fast evolving – construction traffic makes it appear, though it isn’t presumably, Celtic Tiger Ireland. Ireland constructed an incredibly false but real vision of itself as it redesigned its future given the bankroll. Plenty there in itself to think about desires and wishes.
Much to play with here beyond what you will see but it is ann insatiable polemic. After you.