It has a beginning, a middle and an end.

We’re introduced to Assaf (Qais Attallah) as a kid in Gaza, alongside sister Nour (Hiba Attallah) and their friends, Ahmad and Omar (Ahmad Qassim; Abdalkarim Abubaraka). My film ‘poster’ (I make them up from the publicity photos) still is the same Assaf but in 2012 driving a self – enterprising cab to make a living.  He has now reached a level where the harsh realities and day to day existence is for everyone, save one or two including a cameo character played by the Director, showing even war zones have demigods those who prey on their own citizens to live engrandised life’s – very basic.  The early years are full of vitalality and the story begins with a young quartet. Above. They try to form a group around Assaf and have plans to obtain proper instruments and use that scarce commodity, electricity, to perform everywhere.

These kids act extraordinarily well.  Initially there aren’t some stilted moments but quickly the foot races, the cheeky episodes and funny lines come thick and fast as they negotiate live among their peers.  The picture of the families is built, their ordinary lives of going to school and other kids playing.  There is a lot of running and jumping. Minor scrapes end up as foot races.  Other kids run through frames, building, gap, drop jumping in a running line.  The expanse of the environment thus explored as a source of freedom and expression of self.

1. Assaf (Qais Attallah) teenage years of forming a band full of hope and charged with disappointment and despair escape one way or another. Help from musicians.

2. Assaf (Tawfeek Barhom – a big presence and talent) as a University student and artist.  The stagnation of a middle period where bombing has yet again intensified (2012) and the attempts to reach a goal is stop/start with the first step being to get to the Palestine Idol auditions.

3. Assaf (still Tawfeek with intersected at the apogee of the star making TV footage of the real Assaf.)

Early Hany Abu-Assad films Academy nominated were Paradise Now (2005), about two would-be suicide bombers and Omar (2013), love story thriller drama about Palestinian collaborators and Israeli intelligence handlers. This also – while entirely different from his earlier films and PG rated to achieve a global viewing, is similar in ways to Stand by Me, 1986, Rob Reiner.

Gaza is under seige and there is a strip of sea bordered by a fence between towns along the beautiful coast. The blockade from ’07 and the heavy bombardment from the 2008-09 Israeli assault on Gaza are clear.  The towns standing at the end of theses fences, stand as signatures of the living but also of post conflict survival and precedes more wanton destruction by the Israelis.  The countryside which itself is drained of water by the Israelis for their own use and to create monopolies in agricultural markets (figs) each season, is a rare source of food but it is in a strip of imprisonment and suppression which is enforced so the Israelis can wipe out an entire race.  There are currently just over 50% of the population under 18 and the older generation have paid an enormous price for their faith to Islam and Mohammed  – and the Jewish faith have effectively signed the declaration of intent for Isis and other factions who do not agree with peace as the means to survive according to the Koran but subvert – as the Jewish faith do through imposition, force and suppression of democracy – they laud their own standards of democracy while denying it and their own obligations to their neighbours – through these lands. They allow freedom of expression within sects but denegrate differences between those sects.

Do not forget this film is based very much on fact. Ask why it is made.  Ask what the people of Gaza feel and how these small elements stand up for equality and freedom in such horrendous circumstances and this juxtaposition is political and a voice.  It only altered for the sake of moral proprietary some scenes for dramatic flow.  The same is a continuous process within the UN with non-enforcement of mandates, and USA in cohort with western capatilist nihilism.  All produce the raw component of war here with a vast array and arsenal of weapons.  This film creates a backdrop which puts aside nations leaders and global manipulations making wealth and enormous gains through continued warfare, for the same ‘bread and circuses’ sideline distractions as the only means of expelling the despair.  The west makes an entirely falsified world out of it with sports, non-religious worship, ownership, greed and avarice games, extremes of entertainment for the masses.  The infiltration is The Idol – the TV antenna as well as showing atrocities from other parts of the world – along with environmental ruin – shifts inside the meagre domestic lives of the Gazians.

It is particularly crazy to be attempting to depict this film in measures or indices of the film industry market.  Viewers and providers.  The network of access to films is burgeoning.  I have been to Palestinian events recently and seen around ten hours of Gaza related film material.  The last was a late visit to the film Death in Gaza. The death, one of many, that of James Millar a filmaker who was shot by an Israeli soldier in the Gaza Strip. What the Israeli was doing in Gaza with a gun except for powering the cycle of violence, is beyond explanation moral or otherwise.  The journalist is a witness as witnesses exist throughout mankinds presence on earth. 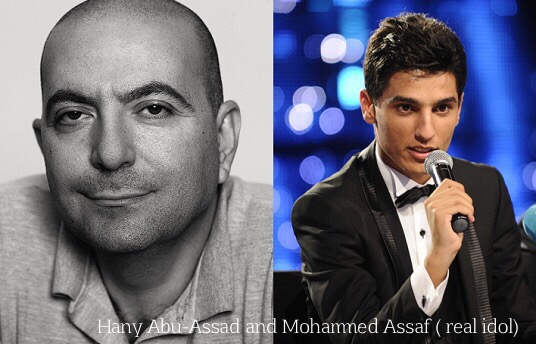 Here we have a film witnessing the Gazians imitating the West in their route of escapism with a jury SMS telecoms driven lavish piece of television theatre where star makers sit – the Simon Cowell formula – buy it up pop music and sell it back to them – and create stardust.  This version of idolatry is Sphinx like. The tombs of Egypt must be rattling with envy of how elevated such trivial things can become hyped.  The bejeweled Nefrititi is twinkling in the heavens looking down.  The borders crossed being the flow of human emotion centered on inner contentment shown brazenly and without irony.  The difference here in this Middle eastern culture, is that from the beginning the essence of the singing is based in distant long carried folk and traditional voice narratives.  In fact the Opera house is mentioned several times as an aside given the level expected of any performer. Ululating, wailing is one form of vocalising, singing used to evoke situation, emotion, will, and Assaf uses his skills by being hired for prayers in Mosques.  The quartet need money and they scour the edges – of the sea for fish to sell, then one keyboards player -see below right! – who obtains through the tunnels to Egypt, hamburgers and buns, starts his own fast food mobile business with apologies to ‘Mockdonalds’.

Initially we see the relatively carefree but street wise children open up to their vision of an alternative future.  Within families girls will sometimes wear or not the Hijab according to their own minds.  The dress is mainly western influenced but it is a’uniform of mutual poverty’.  In – and we visit hospital for a number of related, unrelated things, – the Doctors, we have very determined, driven morally guided, workhorses of survival, balancing with no judgement the fate of strangers and in circumstances where nothing is normal, in basic conditions.  Beds are arranged as all hospitals but with a scarcity of equipment around wards and are shared between the ages and genders.  The nurses wear Hijabs and the hospital is home to some terminally ill and has modern equipment in parts dealing with the worse of cases.

Assaf is not immune to this in his childhood and while nothing is shown by way of the aftermath of bombing or incoming fire these people struggle daily with the everyday things and every family is touched by some unwelcome fate. 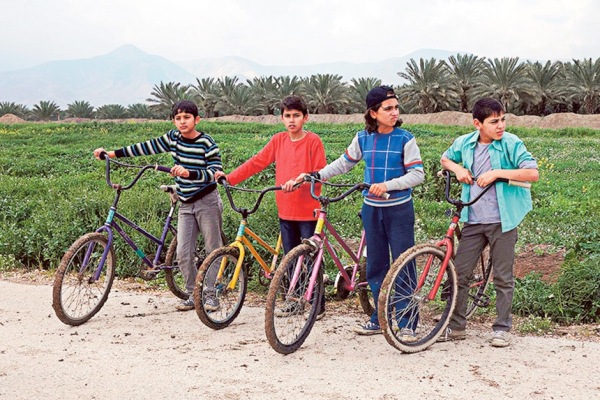 They ride their bikes like many kids though this is ordinary Gaza and a prison.

The escape is a task which must overcome the imprisonment and blockade.  I won’t go any further and expand on the tale obviously has global coverage even before the film.  A British newscaster tells the story in the film itself!

So go see and be a witness. 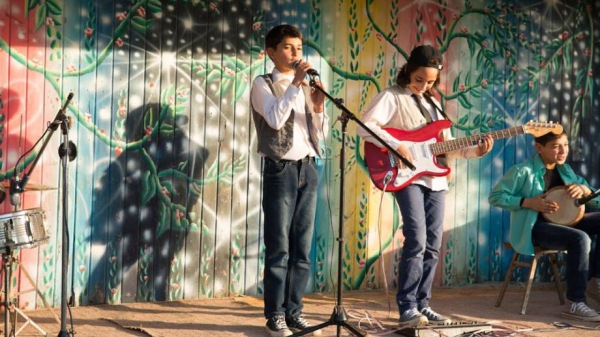 Since last year when I saw Timbuktu a film of very similar political scope if entirely different in subject matter – it portrays childrens plight in these times though – I have not been so deeply drawn along with the expanse of film making, as it stepping outside the normality, by its constructive insicive informative composition/construction.  The story is not incidental but it carries a very strong message of the fate of a people distraught and also living hopefull of change.  That alone is extraordinary given what has happened.  The film will not disappoint you and reward any reasoning with the issues. You will perhaps not have as strident opinions as myself, have different views and I place this review as only a mere side discussion on the massive problems.  There is much arising however which may not have occured to you as indeed it hadn’t occured to me – the cultural basic retention present within the Palestinian people of their unique place within themselves – the way that Western culture has created ways of enticing people into its ‘snare’.  So it will cause many varied reactions.  It has very sad notes and is emotionally strong with very solid performances.  The film introduces Assafs sister Nour who is a star of the film played by Hiba Atallah.  She is brilliant in the role and faster in her wits and on her feet than some of the boys.  Plenty to recommend.

On at Queens Film Theatre Belfast from Friday 10 August through to and including Thursday 18 August 2016.