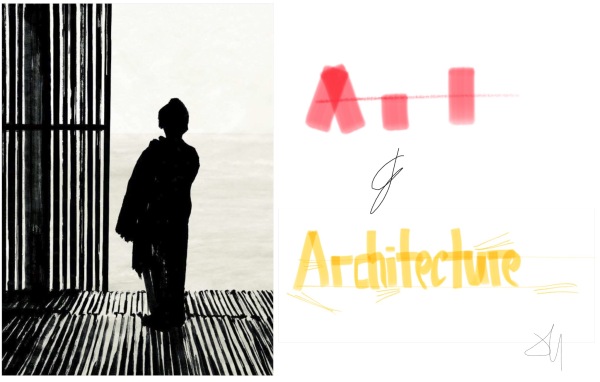 I used Kengo Kuma’s books (little) on Small Architecture and Natural Architecture as jumping off points for a discussion on the equation with art in its many forms which is to me fascinating. <strong>Kengo Kuma</strong> (隈 研吾 <em>Kuma Kengo</em>, born 1954) is a Japanese and professor at the Graduate School of Architecture at Tokyo.  Kuma is also noted for his prolific writings. I tale heed when an Architect talks about ‘caulking widths!’ and the other day I spoke to a tiler about the ‘Equipe’ (Spanish) tiles he was using and they were perfectly utilised and the caulking was a light grey instead of a white or dark grey with the tiling – external and white polished ceramic – little modulations on a modest retail facade. The detail imbued by Kuma is similarly drawn.

With painting, a subject and other visual Art forms, techniques line up tougher to provide solutions and knowledge we otherwise take for granted or fail to see the connections between. The challenge here is to express the randomness in the regularity of nature’s life and movement through time which is a perpetual engagement.

Natural Architecture is calling us to think of Buildings as clothing says Kuma.  In the characteristics of the body the Heritage Museum of Kuma (Hiroshige Museum) is in three layers. An overcoat of 3cm x 6cm cedar slats, at 12cm intervals, inside his a jacket of <em>washi</em> paper wrapped cedar louvred. Finally on the inside is a layer of <em>washi</em> paper illuminated from within. The structure and elements of walling, flooring are at multiples of 12cm.  The studs of the light walls are at 24cms intervals. The walls are like Japanese inn <em>shoji</em> screens. As this form of construction would be in a public building a layer of plasticised paper was applied to the inner layer to thwart children or damage from visitors.

While this is a compromise the principles hold true.  The flooring too is 24cm squares. The structural engineers – Shigeru Akol and Satoml Makino – designed slender columns keeping the rhythm.  Using humanised materials – <em>plastics</em> – would seem like abandoning the natural approach or compromise but Kuma correctly maintains there would be no ‘Architecture’ or it would be at a standstill were modern inventions, uses not applied. There is no right way he suggests and things must co-exist.  The form of a Building must be a collection of things based on collectivity, humility and hard work.

When this approach is further stimulated by considering the outer world and the barrier the forms make with it there is a further compromise or idea to be taken in. The modular is Le Corbusier territory famously and he was also conscious of the natural responses. Even in The Modular. The plan of Paris 1937 had its relation to nature. Seurat is another whose senses were inspired as Kuma points out by nature’s rhythms.  He is conscious of achieving rhythm by ‘disrupting’ it through choice. The ‘disruption’ takes the shape of a lover for example shaping into modular form light shading a floor or water. It makes the senses defence the man made and the natural in harmonic resonance.

The way that Seurat found it – expression in painting – and engaging was to devise a technique most resonant with the experience of looking and show the world this manner of seeing.  When he was observing the Normandy headlands of other elements of nature, the way trees sway and people are set into a notion of place, be it as occupants in a man made environment or as constituents of a habitat defined by nature itself, he was at once aware of the <em>En mosse</em> unity of movement and alternating states.  Not many accept that as a way into his work.  Instead some see it as a rejection of the impasto approach of his contemporaries and his sparking pointillist invention as a fractal of spaces with each point belonging in a sense to its neighbour while outwardly there are no similarities between those outer objects and the near object except through the continuum of colour balance throughout.  Each colour being totally different yet at the same time forming this <em>En mosse</em> delight in seeing. Seurat like Kuma and others before him were in essence realising the unity of form through observation of the surreality of paint and line in Human form. They would have it demanded of them to react and the stimuli would be forthcoming with and in ideas and expression.  The Normandy work Le Bec du Hoc, Grandcamp (1885) is one such breakthrough in art. 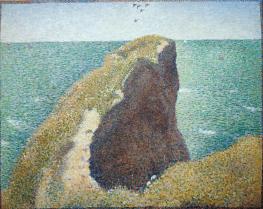 Predating Picasso, Braque, Van Gogh and the many modern painters to follow his insight was to develop – and it was brought forward by drawing purely in pencil tones of black and white on textured paper this abstraction of thought now realised to be advanced in paint. 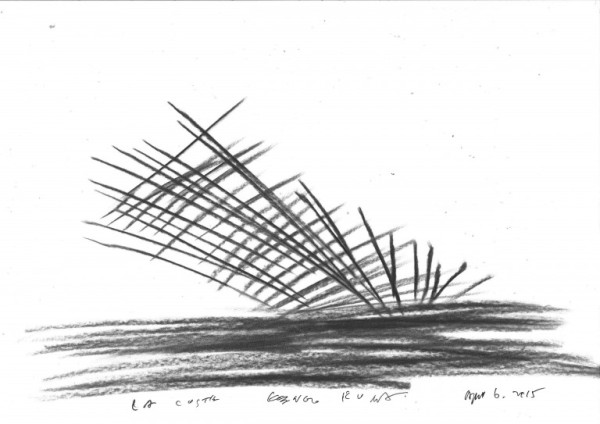 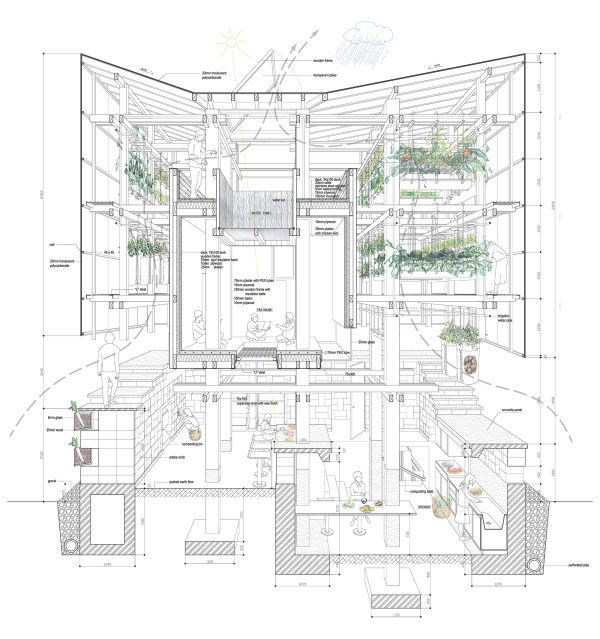 Kuma points to three things that make up our world.  His Japanese senses using folklore and the tale of The Three Pigs.  The outcome is to allow the world as we see it to be viewed in any number of ways and thus Buildings need ‘conform’ to the metaphors of natures delicate balance.  Each ‘string’ of nature interconnecting as today science shows and continuously proves to us. The change is manifested in nature and stubborn as mankind adaptability is necessary and a given. The interaction too is often cited. That interaction between particles in ourselves and in nature and which artists find compelling in subject. As Kuma raises <em>Monadology</em> is the (Leibniz) theory of monad recombination or multiple variations producing single entities themselves compromised by time and interactivity.  Or words to that effect!

More temporal is the artists quest. Seurat was in his work a philosopher painter. With his expression he enabled others to see the vision of combinations in colour and their juxtaposition.

The painting most often cited as his ‘enlightenment moment, for the viewer, was Sunday Afternoon on the Island of La Grand Jatte (1884-86), undoubtedly the miraculous societal and beautiful flaneur, promenading, egalitarian viewpoint which took another perspective on the world within it the 57 or so characters. Does the black dog count?

With it came a one man view on which were to be built other abstractions.  Above is a psychological drawing of Seurat himself  (no.3.) as a lone person on La Grande Jette giving a meaning also in singular societal form, as well as seeing the painting itself being a singular reality.  The same can be said of the lone fisher lady next along.  Neither could it be construed, nor would he have sought that idea, as it having a special status, it simply became symbolically of itself.  It was as just one painting and each time Seurat painted he contributed further to the panthéon françaises of the stable of art.  The panthéon françaises is another route into this thinking. By saintly intervention almost the presence of spirit is told in Buildings and this is since Newgrange, Ireland, to this example, a national monument in Paris, France, it was used as a sepulcher for ‘eminancy’.  The Church that follows.

The church of Ste. Geneviève formed in 1764 was secularized in 1885 and to many as  monument was known in Seurat’s time Churches held a special imagery.

As nations define themselves through the respectfulness of habitat Architecture expands those implicated values. The shifting changes of the outer world are stilled in a Cathedral as the past is venerated and reflected on.  War and compromise of the human destruction of meditative states are shades of liberty.  The other sense within a Church most connecting with self and affinity to a higher entity is silence. The inner prayer. With this silence the words when the state of inner peace and enlightenment is reached some rejoicing or in the case of a Church worship is given in song and music. The condition of mankind is satiated temporarily as it is with paintings.

Life is temporary nature is permanent.  Edges of materials are often an artists field of exploration as they are in Architecture.  Glass and steel.  Man made and conforming to many attributes in behaviour. Behaviour is obtained as with man and neither is the person is defined by their behaviour but how they are. Conceivably individual and not as in relation to another thing. Force is applied to material to obtain a reaction and it is therefore defined by that reaction.

Compromises are evident in Japanese thinking however revered it has become. Edo and one hundred views, a compromise numerically there, flipping the horizontal to the vertical, a compromise there. Intrinsic are the compromises of distilling thoughts into the numerical or geometrical whereas the abiding theme is regularly of time as revolving and returning as night and day.

Seurat never finishes a process in his work.  Rather he moves onto the next trial of the idea of seeing. The subject matter is only partially societal in its observation. Whatever is forming a frame or image it is to be subjected to a trial or excursive outworking in art. The medium is the matter. The concepts are conjunctions of the viewers perceptions overlaying the relative ideas of every artist. Be it promenading or working in the fields, or at leisure on a lake or fishing on a river everyone there is a discussion of life involved.

After Seurat by myself.

Seurat genius’s was to form into his new-impressionist technique that abstraction which would influence other artists.  I believe this went into glass and sculpture. Henry Moore is attributed with ‘inventing’ the hole in sculpture but never alone with his art it can only be seen in relation to other works.  The preceding or later forms tell us what to appreciate of the work.  A value is struck and each one is different. A previous observation I made concerning this is found in an earlier exploration of Game of Thrones https://wp.me/p2R05n-ka in comparison with a place we’re a number of artists collaborated on the reforming of Coventry Cathedral. The artists there to make the point extremely well, just as Seurat made.

I once had a long conversation with Zaha Hadid when we encountered together maromina plaster at the 9h gallery I think in London. Asking what I was doing and observing my touching a plastered wall with the Venetian plaster technique in understated glory she was at once in agreement concerning the multiple readings of the distressed appearance and randomness it evoked. The control of material was meticulous in its functionality and with little holes, ‘flaws’, perhaps gathering tiny particles of dust in the indents, the presence of the material as a singular statement of collected skill and artefact would be a long subject of materials and their compromised beauty.  Even now long after it, is the vision of the late Zaha Hadid whose work employed those characteristic formations of rationality along with the expression through material the natural value aesthetic she became renowned for. 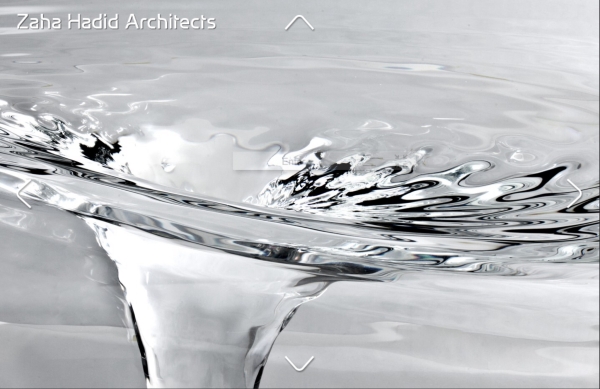