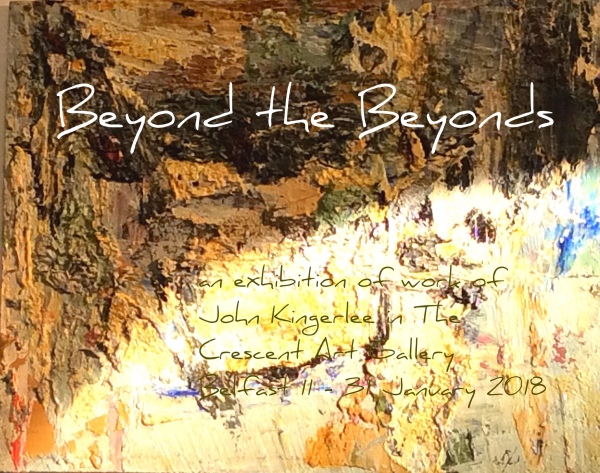 On entering the rooms where John Kingerlee’s work is on exhibition light streams in from the first floor south facing windows of the former Victoria College at the reclaimed Crescent Arts Centre Belfast illuminating Beyond the Beyonds. A phrase comes to mind from Marshall McLuhan whose mastery of conjunction plagued scholarly thought with its soundbite philosophical stance on media. It is Inscrutable Condition. Well it’s not. Like McLuhan fought with the circumstances of time we see in John Kingerlee’s work an infusible power still restless in encounter. There is a possible connection I make with the former involvement of Kingerlee in writing with the similar approach of a grammar, rhetoric and logic, the trivium engaged in while considering along with Heaney whose strength lay in the fragility of words each transformed, transform their sphere of interest. One the painter another the convict. Convinced by words and paint of the beyond and asking questions of us and themselves through our at times nightmarish lack of mutual learning. A real breath of scoping out materiality in a venture undertaken is strongly held in reading the work here on display.

Kingerlee also moved his place of residence. From Birmingham eventually arriving in Ireland. McLuhan a Canadian outlier of the USA full on embrace of modernity and contemporary tools, he found himself in Cambridge able to distill in ‘soundbites’ while eschewing its tyranny, our multiple means of communication. In the latest outstanding work of Leontia Flynn The Radio her poetry if McLuhan affected by the rewarding swaying of words in our times fielded in a tyranny of locked in media forms. Her poem on Heaney is particularly deep while is fresh in these perceptions. These words and her italics, Seamus Heaney : August 30th 2013. “The way we’re living will have been our life.” which is a reaction, a eulogy or to use a less provocative word, homage to the poet who has left through the only available door.

Boundaries mattered to Seamus Heaney whose words for the title of this unique exhibition. It is beautifully hung in three relatively small linked rooms with a scale of human persuasion connecting the visitor to the work intimately. Exhibitor, Curator Larry Powell has combined a literary and long understanding of the works evolution to curate and present a homage of many years work brought together in a quite extraordinary full on breathtaking encounter with not just this artist work but the meaning of art itself. Often it is said and local art Professor Mike Cattos words in the catalogue follow this train of thought, the work is on the edge of experience with paint and image. Two themes dominate, Heads and Grid or Pattern. though landscape and collage sit alongside. Materials are impasto oil or giclee paint, acrylic occasionally on board, canvas, aluminum, Indian paper in multiple overlays of expression. Each is a piece in continuation of a symphonic approach elegantly placing accompaniment of the central outworking of a inner thought process which is absent from ego and therefore is internally hippocampus controlled, switched off which is where artists will tell you they are in the clearing space. The space where they are free to communicate through paint or media.

Two pieces in a grid of 12 aluminum panels completing a frame of 305 x 305 cm majestically create scale and presence. Neighbours Grid, Cullen’s Grid respectively. It is especially clear this is where John Kingerlee is distinguishing himself in placing his work out there for us to enjoy and embrace. The process is a completion which he has ventured to place Heads, Landscape, figuratively and semi abstracted – position. No one is aware of how the mind fully computes these encounters. Not yet anyway. Sometimes you feel like you are in a place where the oxygen has been drawn from you like being on top of a glacier, a mountain high altitude sickness, then the next moment a warm immersion of imbibing gratitude of finding a place to unify similar reactions as coalescence of almost primordial inner self. Few realise colour as Kingerlee.

For immediate entry only occasionally are little seemingly inconsequential figurative forms included. Postage stamps are a collage tool employed to symbolic effect placing a small token narrative to juxtapose our everyday literal interpretation. It’s as if it’s not about that asking you to go on into the several dynamic ranges of colour graduations. Simply to explore by being invited in. A device which familiarity is often employed by abstract artists to deflect critical abstention. I call it savvy. Collage is a favourite tool of another Irish Artist. Another native of immense significance as an astute conveyor of ourselves and our perceptions and times. Sean Hillen. Here the range is non political but rooted in good old fashioned wisdom. Politicai wisdom but wisdom isn’t politics as they might have you believe. 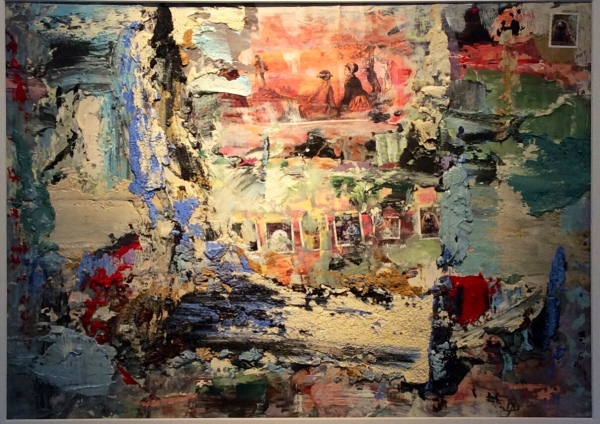 So John Kingerlee chooses a different path. Another artist practicing in Ireland Dermot Seymour does narrative painting with a political edge which is itself contradiction, eschewing the normal projections believed to be perceived. Being a native of Birmingham and John Kingerlee has as a background a literal background, wishing at first to be a writer and following through a confronting imagination telling him stories visually of earthen subjects eventually leading to what we see today in his early eighties (b. 1936) a fulmination, oration of his essence. It does not make sense for him to try political expressiveness as those mentioned above, the line instead is of discovery found historically except by a – and this is an outsiders objectivity – the genus loci of the islands evocations in the landscape works.

There is no comparison to be made with artists such as Dada practitioners, portrait non-conformists (Bacon, Braque) or media savvy practitioners such as Kooning and Pollack but to go beyond that. Beyond the Beyonds. Seamus Heaney was subtle in his ways and more grateful were we for his illuminating narrative. In such a phrase he is I think acknowledging his own encounter of art through a lifetime. Greek Gods, Apollo came to mind. That his visual vocabulary was as large as his language constructs. He would have absorbed all that is visually inspiring and tragic alongside the means to collect it mentally. Therefore it is possible to say he was expressing the thought given by the work here and other elements seen – the art witnessed is outside of us still and is working within us or on us to accommodate, the unimagined yet to be gathered in, poles we are within. I looked for the mythological creatures, sea horses Heaney may have imagined observing in his classical theorist mind, such was the odyssey of looking.

Earth is both Heaney and Kingerlee’s tale. The human is either seeing the world go round them or they go round the world. Neither pathway is a wrong one but singularity is a difficulty, or challenge, as humans we are each separate and this essence is something Seamus Heaney has seen somehow in the work. Each of us separate from the person next to us. Vantage points are imitating expectations. Curation is at once a function causing juxtaposition which is a failsafe in exhibitors eyes of staging contest of will and endurance in spectacle. World museums frequently alter their game changing efforts to create gravitas, to enlighten, to mound or reach perceptions otherwise unvisited. Barriers are reduced often and it is narrative which – this discourse is only a single opinion brought from encounter- then unveils more thoughts. The glacial or the warmth of self connection to the work is where many take the time to achieve some knowledge-filled own time.

John Berger was one of the first like Marshall McLuhan to use contemporary rule breaking formation of words to allow an expedient entry to understanding learnt through allowing new media – detested by McLuhan but giving him a comfortable living – to provide alternative and therefore contestable views. Art history is changing everyday. To see paintings is primary. In visiting this exhibition then looking at a very well produced catalogue, full of indication and reproduction, itself a valid record and entry point, it is evident immediately their is absolutely no comparison or equality of experience to be had except by having nothing between you and the canvas, work. Most people visiting galleries know this and they ‘set aside’ prejudice of previous experiences – of galleries, of the work supposed, of opinions received, of visual comparisons.

There are few mediums of art more direct than paint on a basic flat surface. So what is it we are seeing and what is it John Kingerlee has achieved which makes this work distinctive and unique? It’s meaning is in the continuation of evolving our own thought experiences appreciating layers of context and going beyond it through to new ideas of empirical sense of humanity and self. We are in search through our examinations of things, objects and daily ephemera, notions which change and alter realism. Some things are un-salvageable until alternative messages come our way. Choices are complex as these paintings are capable of billions of alternative meanings once seen. I came away with one word which is a word to sum up our quest towards higher meaning for ourselves and mankind which this exhibition realises in a way. It is not a closing of a journey. It is a quest towards salvation. Salvation. 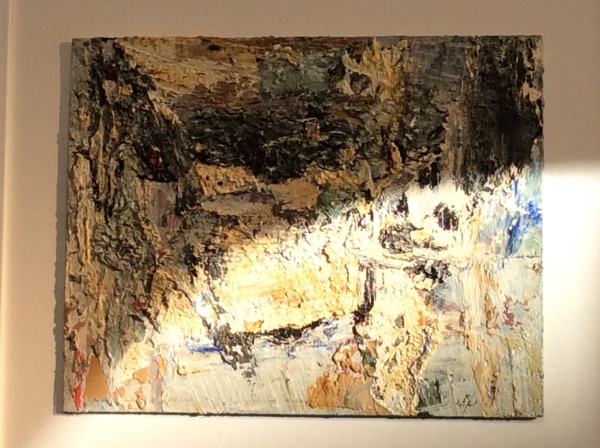 Beyond the Beyonds – Work by John Kingerlee is on at The Crescent Gallery – Crescent Arts Centre – http://www.crescentarts.org University Road Belfast. http://www.kingerlee.com Larry Powell Art Consultant tel. +44 (0) 7765 406139 and at larrymatthewpowell@icloud.com