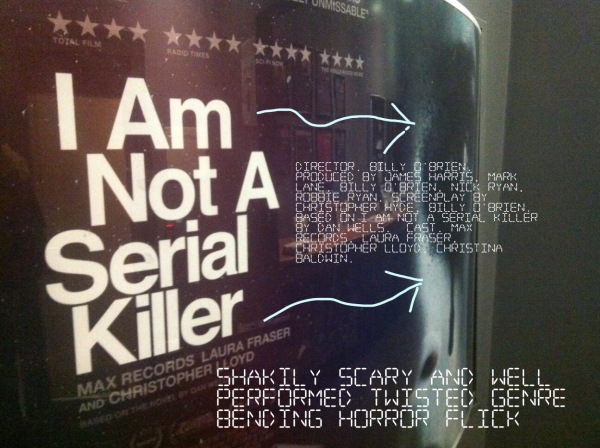 I am not a serial killer.

I am not a serial killer delivers as a psychotic horror film set in a Mid West America small town called Clayton in a surprisingly luscious shocking and intensely entertaining way.  Shooting began in Virginia, Minnesota, on 28 February 2015. It premiered at the South by Southwest Film Festival on 13 March 2016. 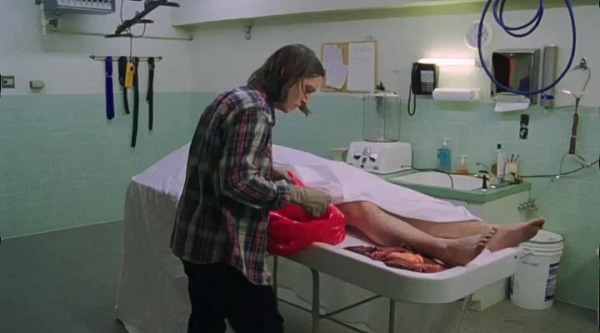 It follows a teenage high school boy who lives with his Funeral Director Mum and business partner Margaret while he gains hands on experience of preparation of cadavers on the white ceramic lab table his Mum (Laura Fraser) uses to embalm the many corpses the small town accumulates.  Being allowed in the workspace is the first surprise.  Very much from the beginning a gore fest is imagined as coming at you.  The first, as the film opens,  is a murdered mechanic, 53 years old. In the opening scene and in typical Robbie Ryan cinematography we view the Maun Street from behind the yellow tape line as we observe the body being carted to the rear of the ambulance in broad daylight.  The mechanics slightly incomplete body makes it to the Funeral home via. the mortuary. Young John is midspace and closer and on his bike observing in Ryan’s long shot.  When the Ambulance departs a quip remark between the police officers and John set the ball rolling.  The basis though is kept to the real process without any directorial, script writing flannel.  A focus on the personalities develops with ease making this an enjoyable feast of detecting who are the good, bad and victims, perpetrators in the rollout of the – far enough away for it not to be our town melodrama, crime thriller.  But it is every town. 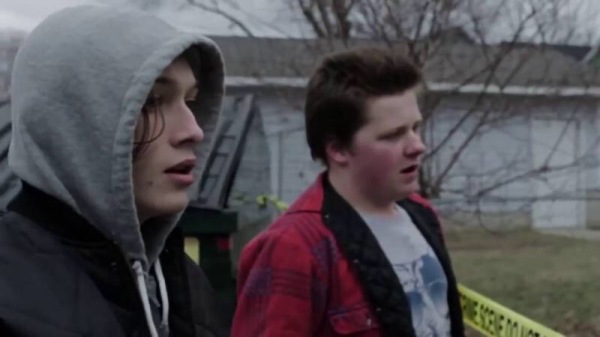 As any youthful encounter with death might, this mortal coil contests young John played with ratcheting tension of his own uncertain derivation in a convincingly confronted boundary crossing boy.  A machine known as the pop up features as a character and is the solution stopping instrument doing the cathartic transformation enacted to preserve a corpse and have it melt in its own way back to dust once all sense of liquicication has gone.  The body returning to its earthly final resting place and through that portal of death to burial and.  John has few school friends given his macabre home situation.  The co-habiting women are diligent providers of a service not many would choose.

The thing is this is a special movie in the sense it delivers a story which seems so peculiar and natural as an adjunct to normal life.  Challenged by his headmaster early on when his essays are delivered with added mortal content, given his increasing expertise, John is asked to become more normal and John contests the premis he actually is not normal by reciting back to the headmaster the fact it is he who is defining normal by making John appear abnormal.  John is a near neighbour of the star of the film – Christopher Lloyd who could not be further from the Back to the Future wizard – playing a seemingly affable elderly gentleman whose routines are fairly, well routine and he displays a youthful vest full adoration of his homely wife and all seems fifty shades of normal.  William Cowper is a part which suits Christopher Lloyd so admirably.  He appears a shade frail and has gotten on into his dotage (in the film!).

There is a powerful underlying spirituality accumulating as the film progresses and through its numerous deaths.  Well you didn’t think I was unlikely to tell you there were several murdersnot just one and there is therefore a progression to the horror? After all a big clue in the setting of a boy in a family Funeral business is fairly indicative of where these well developed characters are going.  The other indicators are the Stephen King (esque) mentions, The Thing, the Halloween trailed at school where John turns up dressed as a Pierrot character subtexting it with lots of movies (hyjacked as previous films as a ‘Killer Clown’ stik) I prefer the Gerard Dillon multidimensional use of Pierrot in so much of his work and one (he was an artist born on the Falls Road in Belfast if anyone is asking) whose split mental state called on Pierrot in a lot of his work alongside Chagall influences.  Check them out.  We are invited into the cerebral John with his essays and his own self analysis. 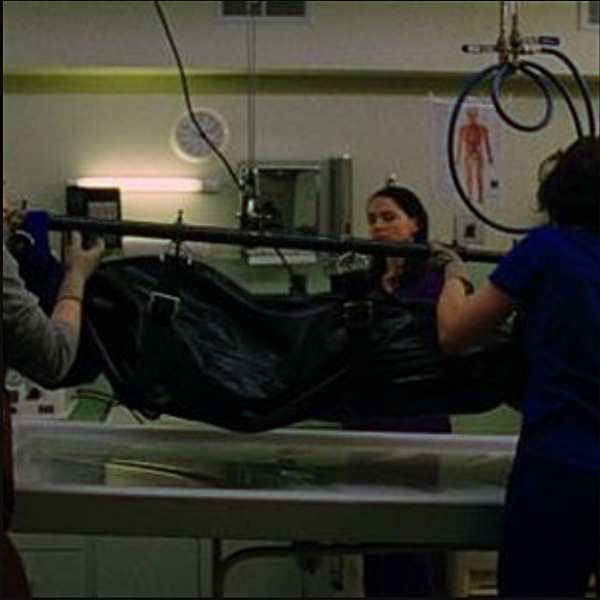 We also get to know he is referred by his Doctor on the basis of therapy in his ‘fatherless’ environment to a young nerdy psychoanalyist played by the Irish actor Karl Geary with a hammy, a little irritating Irish/American droll, though it is most times buried by highly crafted psycobabble along side some incisive thoughts. On route we also get a bit of William Blake and have a Blake off (sic) recitative to which I will side step with this Blakeian wisdom as follows.  Blake saw us inhabiting a world with real spirits among us. They would be seen by him in fields among the workers picking crops, would be seen observing us from a tree, “their luminous wings, ‘bespangled every bough like stars.’”  It is something similar to another incident in another film I picked up on.  In it someone had died and responsibilities for the death were mixed.  While neither had caused the death both protagonists confessed to each other they couldn’t get the person out of their head, they were with them all the time. So maybe those ghosts linger if a resolution or reprieve can not be found.

This brings us onto the night time patrols that – as all vigilante style small town anguish descends into – ratcheting up our expectations of more gore.  We are not disappointed.  For me the middle section of the film dragged a little, as bodies themselves got dragged about.  I began thinking of how this Halloweeen, Thanksgiving, Christmas period movie might put people off their Christmas dinner but no.  Much bigger frights and scaryness lay ahead and believe me it was well worth the middle section wait.  It takes on very gripping tense narrative with the entire town becoming paranoid and the Bill character as alluded to earlier is much more than outward appearances suggest.  More split personalities and psycobabble is poured out.  Mum has another child to worry about an Emily, Johns sister eschews the family business for in deep witty contrast goth style rebelliousness.  At least someone sensible is around for ou counterfoil emotional baggage.  No it is perhaps the loafing young friend, perhaps Johns only friend, Nathan who is a nerdy but cool and clever moderator and even for his Dad who is a reactionary Hapless participant in tabloid, News channel hyped angst, Donald Trumps finest companion on the road to hell. 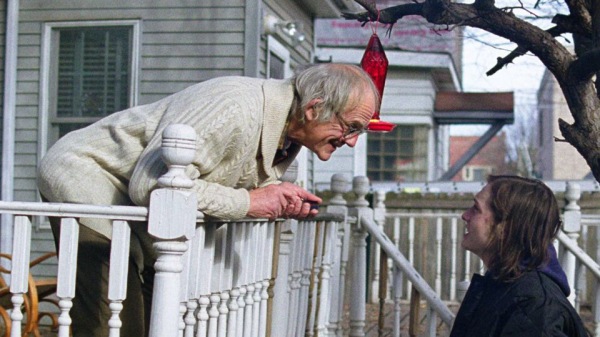 Colour my world. Colour is my world

Robbie Ryan and Director play on our need for progression with little vignettes of comedic black moments and we throughout get a CSI approved black gooey liquid slithering out and resting on each crime scene sans body.  The cinematic value of this contrast of body organs, fluids is astonishingly receptive to this quite unique visionary filmmaking technique showing us; on the one hand – just what I mean, and matterafactly, viscerally, body parts such as mortuary excavated organs, livers, lungs, heart, count them out count them in, – the afore mentioned black goo – the exchange of the darker blood from a cadaver with in the whirling flask sundae coloured ice cream pink red juice lovingly devoured by the lens and also through its plastic pipe progression returning to the body into carefully mechanically photographed sumblime choreography which will have people open eyed and mouth wide open such is the beauty and clarity of almost documentary style educational simplicity conveyed by Robbie Ryan and the pace orchestrated by our Director.

John Wayne Gary is also a sleuth and his detective edge gets him up close with murder.  “Fear is a really weird thing,”    “People are afraid of things, but they’re never afraid of their own actions.” The bestseller book of Dan Wells 2009 is itself comic and dark brought here with the teenager unafraid and possessing what are know as the three parts of the “Macdonald triad” predictors of violent sociopathy. Dr Neblin, Karl Geary, believes he is “a good person” unassuring for us.  Large irrating – it becomes stupidly expected of a nastie/horror film to inflict a dose of bikes, panda masks, clowns – in some of the steerage class plot liners come too much retro navel gazing antics.  It is unfortunate because the film has intuitive other worldy character transformative engagement and blackness enhanced with class 16mm cinematic bravado.  The Christening of a new Christmas horror ‘must watch‘ is sadly just falling off the newness factor in delivery.  Coming close but no palaver.  I kept looking for a dirty white van with ‘Don’t open these doors, there is a decomposing body inside.’ Something Johns Mum, Laura Fraser, might have asked him to draw as she is slightly unhinged not spotting the idiocy of training a teen in the dark and Strwberry Milkshake sundae arts of preparing corpses for ‘removal’ – we are taking you to your place of rest.  Enjoy.  Pick up a leaflet on your way out.

Good as many reviews have been with caustic deep referential content they mostly miss the purity of the act of dying and the momentary lapse only one – a psychotic unreal inhuman being – has any time for.  I think Billy O’Brien and Robbie Ryan choosing to stand off – far away in the first period – then closer implies they don’t get the catharchic experience.  Many a training outing with dark assassins missed probably which is unusually clever being Irish.  Frances McDormand sees them coming. 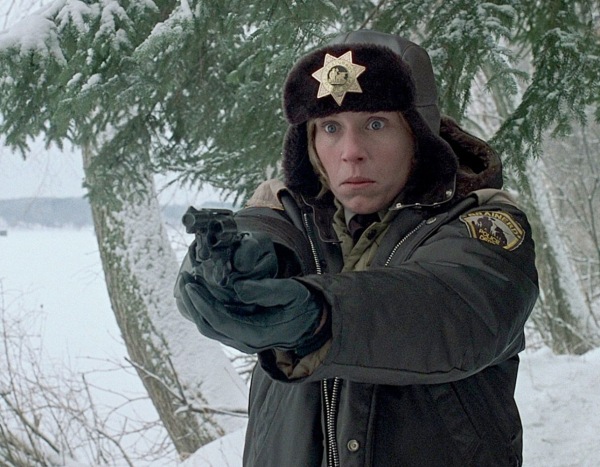 Don’t make me. Or your going up with Norman Greenbaum’s Spirit in the Sky.

It makes it up to four courtesy of the new offerings.  While reservations on the Robbie Ryan familiar stand offish; at times, beautifully atmospheric locational driven camerawork and the wacky inclusion of nod after walked off nod to pluralist film tonality, tones it figures as a splendid creation.  Highly thoughtful and conflicting as to whether you blame anyone on John’s risky approach – is it his inherent fatherlessness heaping his own remit of boundary escaping and the simple motherly love which takes too many things at face value sometimes imperilling her as well as laying on thick the hard work of keeping the work balls in the air (metaphorical) and family cosyness stuffing the turkey for thanksgiving and presidents at Christmas it is a deserved success.  There is surely more work to come in this vein and Laura Fraser and Max Record provide award level leads with heaps of smaller characters excelling the call and pitching in cult like, the model of intention required as a sideline wack.  Taking of which one scene literally had me jump which takes some doing.  A sudden piece of unexpectedness.  For the hot of the film though you have to hand it to Christopher Lloyd whose Mr Bill Crowley will last very long in the memory and film analysts will be crawling over his every word and character development to see the nuanced stage and screen general occupy the space of .. you decide in a deranged horror film. Suspenseful for Christmas fare it is not – just a hyper realistic thriller becoming a drama of latitude.  Everything is resolved at the level of the earth not in the sky.

See I am Not a serial killer on 19 December 20 December 21 December or and 22 December 2016 at QFT Belfast before going back at year end to see Donnie Darko.

The Box has arrived as you can see! 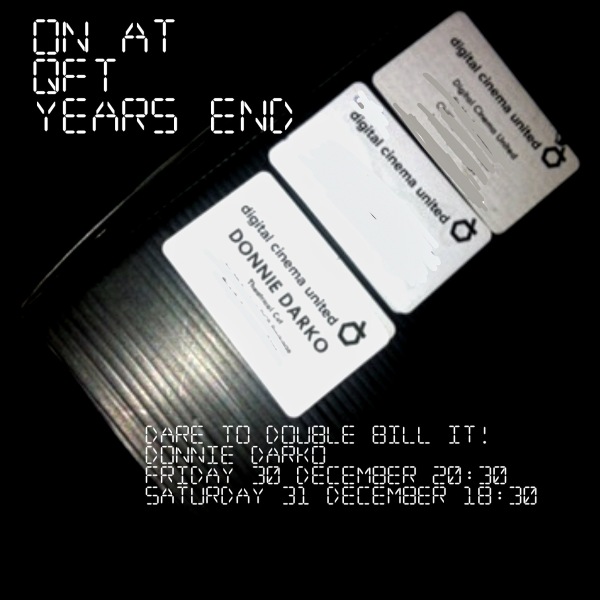 See I am Not a serial killer on 19 December 20 December 21 December or and 22 December 2016 at QFT Belfast before going back at year end to see Donnie Darko.

The Box has arrived as you can see!