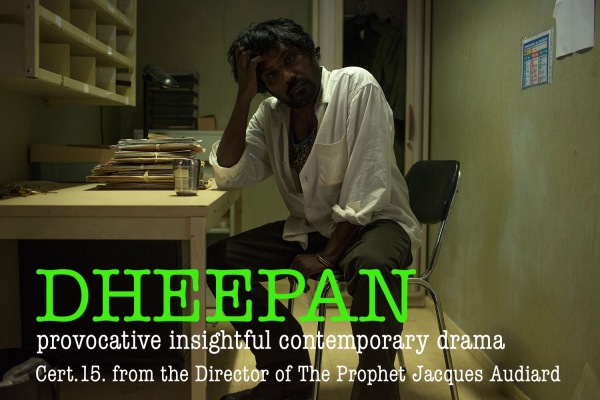 In order to make this possible and plausible he must adopt a false identity and with it adopt a woman and child to form three to seek asylum abroad.  The woman has made her own steps towards adopting a new identity and has in tow her would be daughter making the trio a unit matching false identity papers provided in the state the all wish to leave.  It is a then a bargain is struck between them to accomplish their escape.

In keeping with the style adopted with the 2010 film of Jacques Audiard’s “A Prophet” we are given a story which we see and cannot fathom or say too much about because we, few of us will have encountered such circumstances. All we see is to him real is my way of looking at it.  This is only a fictionalising version of the truth.  We have to see violence.  We have to see utter despair.  We have to see uncontrolled resignation.  This is our current world.

Dheepan is a film about him leaving one quagmire and finding yourself in another. All three get to what they think is a relatively safe place but it turns out to be a compound of criminality.  Society, be it Belguim, France, Germany is in crisis as far as immigration and welfare of immigrants and refugees is concerned.  There is in each; and unlike the United Kingdom which has fashioned slowly but surely a much steadier and fruitful diversity and racial assimilation making it one of the underlying reasons for its popularity in obtaining leave to remain, very great divisiveness.  Even in ares where tourists go in on of those countries white people are told to go back home.  The divisiveness is racist and poverty related.  In Dheepan in its resolution or final closure there is an element which will show this which is probably the reason it is included and which some reviewers mistakenly pronounce as an implausible ending.  I disagree entirely as it is part of the whole vision of he director whose job it is to highlight the complete picture as HE sees it.

The relationship between Dheepan and Yalini is hanging by a thread of common need.  It is in Dheepans mind something possibly to benefit them both.  Both have suffered horrendous losses revealed during the film.  They are both encountering a wholly different world.  In the middle and closest to normality by way of the extended help she receives in this foreign country as she is a mere child, is Illayaal.  She’s has a gift of restraint.  A gift of language and the detachment of a child whose understanding of the world is that is nothing less than a mess though the extremes reach to her also and she is rightfully often fearful.  She notices things the adults do not and the strains between her surrogate father and mother.

The undercurrent in Europe is scary to say the least.  The future is becoming bankrupted as environmental and competing trading nations vie for resources and the sequestration of assets is rampant.  The Chinese particularly making inroads by buying up sections of foreign countries and those countries making a market in their sell off/out aided by corporate machines and banking with no accountability.  The current of the film is in the underworld such – and this is a poor extrapolation perhaps – the consolidation is taking place and being replaced by non governmental states.  States that are purely a commercial entity.  It is a deconolisation of sorts but bypasses the previous right to independence which has been fought and struggled for throughout Africa, throughout the Middle East and the wars are untenably destructive.

This film is like a depth charging missile into the heart of our worlds concious future.  As it moves into terrain and territory hnone or few of us are directly familiar with it produces raw and visceral emotions. It speaks loudly and boldly.  It confronts through actual realised, depicted confrontations the savage core deeply damaging effects of oppression and the sporadic movement of people used to other societies.  Dheepan is very disturbed mentally and it the film on some flashbacks portray the warring ‘crusade’ lost and he is fleeing from.  Those moments are shown infrequently but are powerfully direct and open a new realm to the watcher.  The Director Jacques Audiard, in common with past practice is rarely shy in showing the violence and the close up context within this story.  It produces blow after blow mentally and physically in which few can escape the prevai game message.  It asks why and shows the effect of outrageous misfortune and the dehumanizing world of many.

Without giving too much away hopefully I can only commend this film to you as an explicit piece of almost journalistic drama featuring elements which cross our everyday lives without having the recourse to dissect or define what is happening and to address the problems now.  Many things are moving towards helping people find resolutions but until the realisation is is not what we are put here on earth to do, we are not here to obliterate all we disagree with but seek common humanity as instinctively present in all.