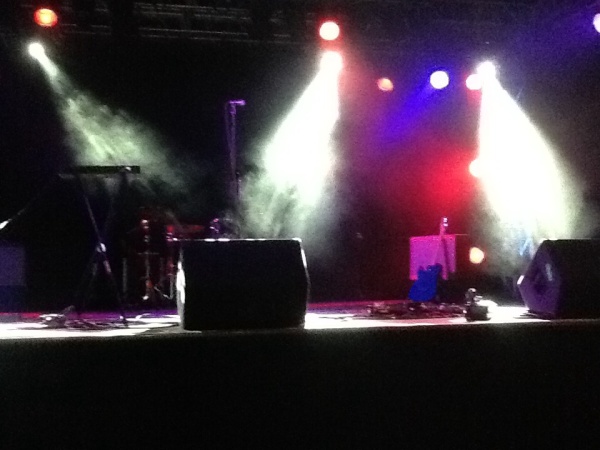 Frank. Directed by Lenny Abrahamson. UK 2014. 1hr 35 mins.
Cast Michael Fassbinder, Domhnall Glesson, Magie Gyllenhall.
Inspired by Frank Sideebottom, loosely.
Who might be Frank?
The precipice Frank Sidebottom clings onto is at the edge of a wounded island. He holds on by isolation which gathered people in as his absence of apparent personality was directed into his enlarged squashed sphere of a paper dome, painted as a boy who resided within on the body of an apparent grown man. The shut out just beyond his skin.

Depictions of persona seeking interpretation in extremis of one kind or another are fairly common as a movie trait. Unlike Her and Under the Skin (previous reviews see search box top right!) this concerns a real life and one that tragically ended only a few years back.The late Chris Sievely figuratively inspired this film; it is a fictional used account of an experience had by Jon Ronson in encountering Frank on tour and mistakenly updated through a process of which an only merit might have been to appeal to a wider contemporary audience. The film industry has been doing it in spades for decades. When Jon turns up as a recruit to the Hotel the gig is at we are ushered in by a Stage Door sign following a nighttime colonnade long shot for underage viewers presumably a directorial aid to ease in the plot.
The problem in this case is that the magic and mystery is of token imbecilic characterisations which only in denouement scores any wrasp of emotional context with which you can relate, an occasion you could hear a pin drop as eyes saw some redemption in their own thoughts.
Head Issue
What results overall is I found a puffball of inflated refracted ego taken up as an artistic source sucked up by all others around this central challenged person. The person a mere figure whose meaning was fabricated within himself as a form of defence for his fearfulness.

Filming a central character whose stik is his overenlarged false head is idiotic, quickly through the limit of sans expression, well one, makes the character as flat as a discarded coke.

His person the real Chris acting Frank acting Frank returns here embodied by Michael Fassbinder. A modern suited mod might be the real Frank. The one he flees from and is the side of Frank at the bottom of his creative genius. The musical side. It only mediates as part of his creative self. Not a big head by any stretch.
Fassbinder flaps his arms, has enormous hands, for an
unfit? city boy this does not sit well nor does the affected American accent convince for the Northern soul boy Frank possibly once was. He limply droops his hands down the guitar in desperation for effect. Lame is not the word. The eccentricity is of the UK kind not remotely USA.
A Story Issues
Jon Ronson on whose story of Frank Is based and has co-scripted with Peter Straughan happened upon the tour of post punk, avant garde, new wave, post colonial, Brit pop, Chemical Brothers outboard motor combo and copped for a role as a band member with Frank recruiting him to play keys.
One character Don – Scoot McNairny is an anthem in himself and this character is the one Jon engages with first. He is deeply troubled. We are deeply sympathetic. He could be a character from centuries past.
Now
As this is 2014 the writers have decided to ditch what could have been an era based movie, one actually relating to the media around Frank in his fate and the music scene, where Brit Pop, Chemical Brothers and Oasis or pre Oasis is were Frank marks on the page and where he was living off.
This is not the same page and frivolises the artist it given it is out there, now on our plain, it can maybe give some new credibility to the actual events and work this film misses as it is both wishful and arch. Ronson as Radiohead.
None of the scenes are believable, except the idea firstly of retreat in which the writing had some sense of idiom. The proceedings are simply methods of filling in the character of the band members. The habitat is hobbit like and spread on the counter pane of Ireland’s redeeming scenery. Even a handy lake conveys tempestuousness when summoned by Lenny Abrahamson. Avant Garde but not Warhol or anything near the epoch those gathered seem to think might materialise.
Then and the Cast
This band had a van and gigs of some kind, unscheduled, unpaid, and sparsely attended one imagined and an other catching vibes of stardust and fortune hindered only by the wrong kind of unmusicality.
In effect except for a song about a checkout girl at …. little traction became of the group Frank founded and here known as The Soronprfbs, band manager ex. roadie Don is a sidekick played as noted above memorably by Scoot McNairny, percussionist Nana very laidback and kooky, Carla Azar, bassist Frenchman Baraque also cool, a French thing happening I guess, Francois Civil and detached, temperamental, possibly reformed psychotic, (my imagination had to adopt a trope to get by the lack of content MG had to play with) theremin player Clara, Maggie Gyllenhall.
The witness to this is Ronson played by Domhnall Glesson who apparently wrote a few of the tunes heard through the film. He is excellent as Jon Ronson providing for the self penned deprecating niavity to play with for Glesson.
He gets the youthful Ronson tripping forward in life taking on the unusual normally eschewed by the mainstream and grasp of the steep slope that is music stardom is naive and at opposite poles to the avant-apocalyptic, post kindergarten, mancunian mental thrashing confines of the band he has just joined. His skills as a storyteller are journalistic and played out in a simplified demeanour in the Ronson of Men who Stare at Goats et al fame.
Makes an alternative diet to men who actually use goats for target practice before becoming rank and file terrorists I suppose and killing fields.
Then some Art Existed
Chris Sievely was many representations of Frank Sidebottom and was continually using the everyday and miscellany that growing up in an industrialized city throws at you but that is an outside story and develops later than the films timeline. So in his new life he is again on screen and beaming down grinning at the absurdity of it all from the future?
The blend of characters are attracted to Frank because he seems their ideal alter ego and he is forgiving of this as it gives him control.

This provides the friction of conflicting surfaces. The surface of his face is pivotal nondescript insouciance. That becomes their reality and hinge on the world. Unwittingly Jon takes on the role of grounding the characters in this plot. For Frank recognises in him the desired escapism Jon pursues also.
It threw at him a disintegration in values, of quality in objects, replication, consumerism which Frankly overwhelmed him most of the time.
Frank or Jon?
For plot we get a tale between two wounded countries. USA. Ireland.
Not exactly a road trip but enough plot to hang a prairie moment on.
Reality passes
A gallery exhibition at The Chelsea Space in 2006 showed in a kind of retrospective, his formation as an artist in conflict. The society in which he later performed commissioned television shows of his persona and like a ventriloquist dummy were trivial and disposable TV fodder, it felt he cashed in his chips there.
Jon Ronson being caught by the shill, Don, allowed a sage normal mentality to inhabit the band. For a change. The character portrayed by Fassbinder is overtly visual and has challenged others who accept his engagement into believing art is formed. Performance art relies on reaction.
The artist finds …X and with this creates without perceived outcome …. Not X. the viewer now the artist plus this …. Not X. With me so far?
Well it is best to describe it as unrepeatable and transitory.
With a band though each song is like a cigarette. Finished you await the next one and the addiction can only be satiated at certain times with the same afterglow melancholia as when you sought it out.
Restless Gestures
I once went to a shed somewhere in the backlands of Surrey to see Ten Pole Tudor and took part in a performance which had most of the attendees marching conga like, after the tall pied piper, which is precisely what we went for and he created the occasion for. Who killed Bambi got murdered several times that night.
If your not related to Henry VIII then TPT has it you cannot create the avant-garde. There was wit and culture, theatre and performance involved as a swipe at the punk despots who thought the world would change if they spat and stamped on a nerd before going to catch a bus or train into the restless suburbs. The only trouble came when the juice ran out. Try margarine.
Frank Sidebottom and his inventor Chris Sievely had an English affliction thing going on about sheds and so the film takes up the adventure where instead of going to a gig the band retreat to a ‘shed’ (the retreat by the Irish lake) to put down their experimental music.
True to the character Frank, instead a performance ensues in which real life is well, replaced by another form of real life. The spaces to be filled and not left empty.
It is a pity the real true life is not here.

Conclusion
##2
Like beads of polystyrene the adherence is everything and once detached blow hither and. The film has that flimsy feel but the acting is what solidly endures and the habit of acting is what features most for me. How each portrayal is drawn and how Fassbinder for instance has little to play around with and gamely comes up with some plausible shapes. Likewise the remainder of the band. Domhnall Glesson is thoroughly at work in the co star role which kind of eclipses oddly that of the main man Frank.
Stephen Rennick populates the film with a pleasant, sans avant garde asides, while Lenny Abrahamson does a good job with close ups and shuffles by with a grocery delivery.
The Frank we see is not the Frank we sort of know and it is never intended to be anything close.
Without it pretending to be anything other than a light black comedy; the makers front it by claiming ahead of the film in material let’s get this out of the way; this not the Frank Sidebottom story pitched so it is much less, it fails as that being a mish mash of the graver aspects with skeletal remains of character playing, albeit executed and aided by the actors own gifts. Like acting the film, Frank, is a persona about not being anything.I just regard it as not on era. I may even tweet out the fact I reviewed it. #productplacement