No poverty of Poetry
Such is our fortune in Belfast and on this island to have a people who know the immense importance of all kinds of Poetry it is treated with great appreciation by many in the community.
Writers readers alike, aplenty, axiomatic, liking and writing mastery alongside the double jointed realism of words limitations which yield and weld solid lines and canons in some hands, none to many, greater than Michael Longley who would tell you winking there are far better than me.. Not a quote more a guess.
Those revered Poets to last longer and as art; in concert with the words of the poet Austin Dobsons lines –
All passes. Art alone
Enduring stays to us;
The Bust outlasts the throne-
The Coin, Tiberius.

Of another art once said-
Patriotism is the last refuge of the scoundrel.
So warns us wisely, of the stature less statuesque words descending a page, onto another and an other. You know the kind.
Another accolade if such trite words are necessary, in ML poetry is he himself readily puts out, is the brevity he favours. Ten volumes and the rest of writing in other forms will go far in quenching the thirst born in the mind satiated like Jameson alongside the friends absent and around.
Two pillars Seamus Heaney and the building stands with the hand reaching down holding the air supporting our own Coliseum. To put no finer point on it. It stands and time no respecter is confusing as once again it’s yesterday.
The sounder this becomes; the brevity, when ML has found each cast of a poem embarked on.
The works of Oscar Wilde have many subsequent orations and many times assiduously pertained in the oddest contexts. The learned teacher in ML will know education itself is a limit so future forgotten teachings evinces the confidence of memory deep and putting the matter at hand to rank and order however forgetful you maybe.
Reflections within poems are so.
The poet offers in precision of line material and insight further heights of connection rapidly flowing in the rafters of your mind.
They construct the architecture with words modern ancient and of others souls reworked as the devil and spirit of God or fashionable disbelievers.
Poems made of things.
The poet pulls the strings.
Telling by reading
ML reflected on a choice of coma, of a lateness in putting down a written word which prevented him as poems dictate a measure found once writing to be obeyed Homer like, restraint, from appending or including favourite common local names of flowers or a roll call of a places collection of villages, even the outlying hills.
This book of Poems is sheer wordcraft.

From the title ‘The Stairwell’ unexpectedly set in America. Others cast out visions if that shore from this edge of Europe. Several rest in Mayo others next door. The scaffolding has been up and down for years in this immensely career defining passage of a book given the changes most recent. 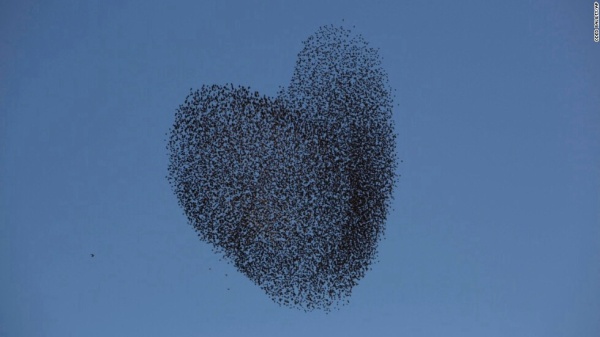 At the heart of the murmurations.
ML is a bit like- but not an ultra obsessive kind who becomes fixated on a particular thing it eventually becomes the scene of his destruction; – that person the brilliant Architect Charles Jeanneret. Corb. who so admired his once lover Eileen Grays house it called him – once rejected – to reside across from it merely or fixedly to admire its motionless form in the ever changing storms of the south of Frances environ. ML has a penchant for having the Homeric sensibility enter into his mind as a route through to the thought embedded taking shape. Sometimes the direct reference, other times the tonality.
Form of ‘The Stairwell’ is a piece of mastery to invert the accomplishment without pretence of any countervailing realisation. It simply is a modern and timeless work. Like most binding capturing time present for presentation the work cannot nor did carry all. Once completed the new building had gathered another Poem ‘Starling’ like nature requiring another roost. The willow bends but tends not to be uprooted so the building takes on another outlier. The ever near birds and continuing memorial a memory throughout this work of ML’s twin late brother Peter the practical Engineer whose perimeter had also no boundaries but a place to live. That place coastal North East England.
A place honoured and mythical by ML’s account in that here and now.

Footnoted prologue.
The QUB Great Hall was full as full can be 9 October 2014; hereafter remembered besides, as the day UKIP attained their first MP to sit on Commons benches. From one perplexity of unknown Politics in a querulous affectation known in daily passing as Democracy. The Battenburgs at tea were sweet as catastrophe and Wall Street took in the other other places recitations on the day today.
To all and forcthe next they have to be cited and marked. ML no less interested in the matters all around kept out the world beyond the ex-gothic famine dated college walks fenestrated to let in an approximation if a calm place outside mothering by. Tungsten lights competing with the hanging rings of candesent mock flames over our heads.
The appointed time was forward by enough time to see the gathering and ML emerge, circulate, visit the Chancellors facilities in case discomforted mid sentence or between the amplitude of anecdotal, or as allowed, some rich story and reasoning accompanying the muse.
At a point when he hesitated once, allowing an audience member who was making a discreet to most eyes exit, he proffered advice assigned for such occasions, by I think it was the discretionary lady Enda, that the best way to internalise any conjecture of slight was to put it down to the persons likelihood of a weak bladder.
Astute he shared it and on other occasions sequestered Gynaecological footnotes or birth notes. By sense or sheer persist acne he also placed a footnote on the poem dedicated and about his long neighbour, present this evening, the eminent and retired paediatrician Claude Field who shared
His anemones as a gift to the divide between their houses. A growing act which like nature occurred with an unexplained self will. He made, in the poem, he relates, CF of the age of 93 prefrontal to abide with the Poems rhythm to replace CF’s correct age of 96. Another act appreciated no doubt, having 3 years in limbo perfectly still and held all the time in natures revered presence alive and still.

I dislike long introductions and set about a Poem I had recently come across in the style of its own manifestation. Of that see the authors apology at the foot. A tactic to reach the bottom – you can skip as Churchill when sometimes asked about a book he recited – “I have read it- in a general way” so mea culpa.

Will it be disturbed this day?…..
It may lie until tomorrow, after sleep
shall I sweep or stir it with a cloth, maybe
gather a small community of dust

No. The dust may be a friend blown in
Returning after many years as visitors
Or the scraps of other nature maybe
Flowers or perished bark oak alder or beech

From where? the Yorkshire hills carried ?
Or Skye or the Hill of Slane? Curragh Plain
Could this dust be a warrior, sailor, Holy man
Or a victim of Gods refrain

On walls, doors, picture frames, a layer cast
Like a exotic creature in watchful rest
Regarding, replenished, open eyes observe
Around each room the dates unveiled past

Sun framed through garden window bars
over the threshold worn and grey
Light splits, spills on the table bright
Revealing on polished hardwood the dust

A dining rectangle, two triangles
Hesitation brings a thought
Wet a finger draw the fish in dust
With the open eye, the unscaled dead
Fish in air stare fixedly aghast to die

When winter calls the dust stays on
I let it rest, memory merges past
with the future skin I cast afloat
Bedfellows with the stories shared

Like a mind the cells link life’s
art of obtaining evaluation of
Dissent or assent? ever graduated
as education espouses to each an end

All along the peace a layer outside
of snows crystals representing as life
bound water in constructed frames
To speak of all the kingdoms, us,
of futures evergreen, free words

John Graham
After ‘Dusting’ by Viola Meynell whose work is kept by Jacob Dallyn
VM who ‘imitated’? ‘translated’ a Poem by Theophile Gautier.

In the words of the beautiful Sade – ‘Is it a crime’ what price contentment?
Striking up a few words should be compulsory but wait then it would seem a chore which it clearly isn’t but it does bind you to the limitations of langauge and inform how that can be turned to advantage.