J.G.Ballard as a writer has been difficult to translate into the Cinematic media though notably Croenenburg succeeded and then some in the nihilistic self extuiguishing Crash in which human desires are not enough in the conventions programmed and hurt and pain must be confronted and when not around sought as a will of living in a world without purpose self sacrifice extends the precept becoming a concept.  It is the concept of the body surface being immaterial and destructible.  Innate memory is apparently located in the brain.  It has a physical location, yet how are we to comprehend how it excercises it’s life giving instructions onboard memory.  The circuitry of cars and machines – being pre internet etc – Ballard in one sense has been prescient although breathtakingly bleak in an appraisal of what might emerge.  Certainly almost apocalyptic violence is manifesting though not as the Nuclear fears expressed in both Crash and High Rise have espoused.  Here and now is as bleak a trajectory.

The concrete jungle in High Rise is a universe, a small holding, within again the Handmaids Tale projection of externals, internals.  Ben Wheatley and his wife and the films screenwriter have as 70’s children forgone the machinations of post war Britain and Wilsons, Labours uprise after the Conservatism which failed in and after the War.

We are, they are acclimation get us in this narrative by keeping the Ballard thematic Seventies view which they can relate to.  If you can also; it’s a bit difficult for the Irish (the scourge of Catholic suppression and child harm is recent memory – only now is England a customizing itself to the horrendous (is it a co-incidence it surfaced – underground – in the seventies as a outplaying of liberalism and thereafter the liberal economics also took time to die?) child church abuses taken place in past eras.  It is also difficult for the North, Belfasts high rises were thrown up as mini me type developments luckily not on a scale represented elsewhere in the United Kingdom, and thus the Divis Towers, Municipal tower blocks were not only of a social class apart from Highpoint and the contemporary Jean Renet style of streets as living machines with added landscaping environments (there called trees and plants!) so the idealism is quashed by Ballard.  Even Jean Renet got things wrong although they were minor errors in comparison.  To place living rooms on the North side; his early designs were far to swift out of the ‘blocks’ and the schoolboy error was emitted, later disposed of. 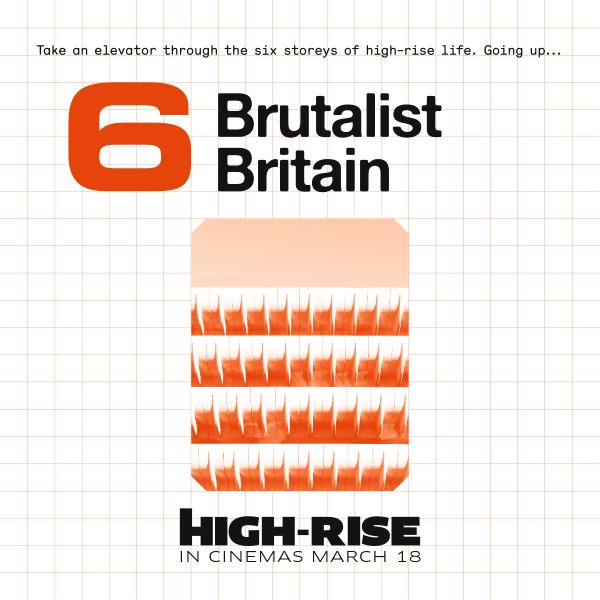 Ballard thought technology was something to destroy humanity, “the high-rise was a model of all that technology had done to make possible the expression of a truly free psychopathology.”  Repression he thought would be our illness.  It is of a kind prescient but it is wholly the making of a society detached and apart from the environment except in its unsustainable present form, population levels being unsustainble. He does not acknowledge that part of our demise rather expresses the violent reaction to it which is not as in High Rise a social contract ripped up but a severe case of the colly wobbles – OK – mental meltdown overcoming a ‘tower block condominium’.

Parts are played by a cast of very accomplished stylised and perhaps becoming ad-hoc actorial spokespersons of an age.  The redoubtable West Cork boho Jeremy Irons adds his throaty gravitas to the (and Ballard names his characters in keeping with character, King, Wilder etc.) Penthouse dweller is he.

Evelyn Waigh tried fictions sing Ernö Goldfinger but it was never likely to reach Ballalrds essentially more demonic vision.  Ernö is attributed to the Hungarian modernist feel London was to be influenced by.  Even maybe Denys Lasdun taking a que  from him in the brutalist, watch the same time comforting realism of form and with erstwhile honesty still considered a valid statement architecturally and socially befitting then and now.

An illustration of the might and probably intolerable self belief of Ernö as opposed to a depiction on film by the redoubtable Irons comes with the story, true, of him called his architectural practice from afar and someone of his Architectural practice answering as he Ernö Goldfinger himself answered. “Goldfinger speaks.” Enraged he said apparently “This IS Goldfinger, Who is this?” Met with silence, “I will be back in my office by four and if I am not told who is my impersonator I shall sack you all.”  He returned to his office at four.  All the staff remained loyal to the miscreant and he said. “Right, you are all fired.”  Every single member of his staff were thus summarily dismissed.  So I wonder if hat featured in the iron filings of Jeremy’s researches.  It is Carparthian precocity and bombast which carried him through and to make monument of social order in the form written down as High Point. 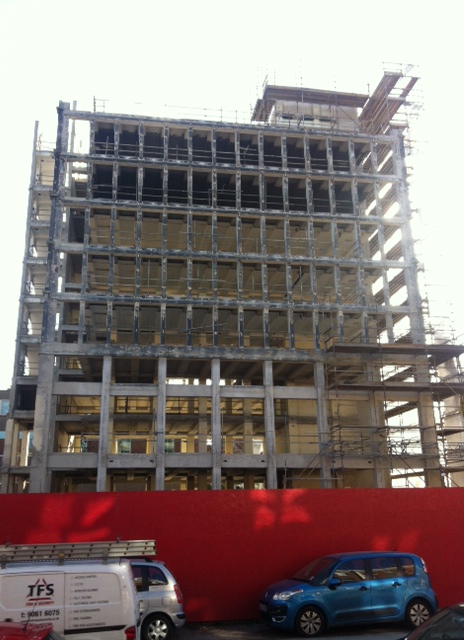 Tom Hiddlestone who is magnificent as the operative Night Manager alongside the malevolent, in the acting sense, Hugh Lawrie is in this a bit too laid back and all Etonian with his Doctorial manner.  It is not as mad as Ballard intended and perhaps constraint was wrongly deployed or instructed by Ben Wheatly. His views on ‘critics’ I learn is somewhat acerbic but I attribute that to his ouevre being table salt currently, not river salt – digest as you see fit.

The film is averistically consuming of material in every sense.  The detail recognised with such relevance and reverence by designers is scornfully treated here not is nicely observed.
A Cinematogopers eye is usually lustfully absorbed into the kind of Goldfinger mettle advanced by and so meticulously created, from the top down to the social order of his office staff. I can hear him proclaim – get on with it.  He apparently dished out the same invective to his Mother.  There is undoubted beauty, relationships with colour and audacious constraint and minimalist editorial guile within much of Goldfingers work from the smallest home, shop to this High Rise ‘edifice’ which is a signature piece now.