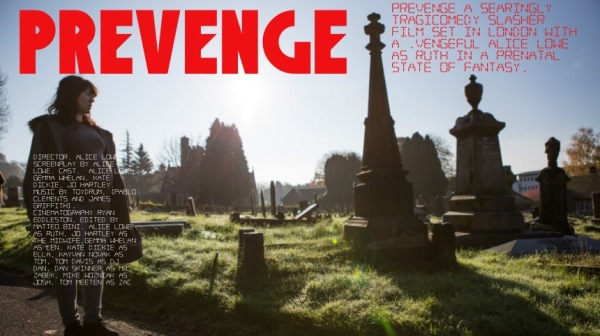 Prevenge A Searingly Tragicomedy Slasher film set in London with a .vengeful Alice Lowe as Ruth in a prenatal state of fantasy.

Alice Lowe writes, stars in, directs her first film in a genre which is fantasy comedic drama.  It is a twist of threads unraveling in her pre-birthing state.  In her womb is a child who has began life with a set of instructions from within.  A fierce moving story, set in built up London, of the advanced maternity state is advanced with a role play of murderous apparent revenge.  Playing Ruth whose partner has met his death in strange circumstances which are revealed incrementally.  The actual circumstances of how Ruth picks out her victims is slow to emerge, at least for me, it took a while to click with me.  Alice Lowe follows her work with Ben Wheatley in Sightseer’s a similar if slightly more tasteful black comedy set in the Lake District doing tourism no favours, alongside Steve Oram.  Having made this film in an incredible shooting over 11 days and with a script it took 2 days to write it is a remarkably fluent film.  The everyday language is heard giving it added authenticity even if it is a bit laden thick on the dark side humour wise. All baby manuals and prenatal, antenatal parenting and calming influences are set aside.  Oddly Ruth is holed up in a hotel and is routinely outdoors in pursuit of answers of some sort while she deals with the stress of losing her partner.  A birth is something which comes at a very bad time and she is catapulted into a bizarre bout of acting on hallucinatory presented thoughts of her yet to be born child.  The yet to be born girl is slightly robotic in speaking to her, we hear her voice and loud instructions, reprimands two a penny, with adult inflections mixed into her high pitched emotionally totemic voice.  Ruth is receptive and is in fact complicit in thinking all out there is not as intended and revenge is necessary for her peace.

In the story she has a guide who is a Nurse, Jo Hartley as the Midwife, with her own bamboozingly off track advice.  Bodies and parts of them feature in scenes of unflinching acts of violence.  Ruth’s weapon of choice is a ten inch kitchen knife which she carries in her handbag. Ambidextrous she flits from having it in her left hand (for self preservation I was on the lookout for tell-tale signs – there are none!) to slitting throats with her right – not a spoiler as this is a slasher movie of gruesome ironic pulsating visceral brutality.  Alice Lowe is emotionally capable of appearing as all things and in only one aside – where a massive slasher movie trope is enacted in homage to the death living thing, make up is needed.  Her expressions manipulate with cruel ease.  ‘Acting’ is also deployed in Ruth’s skill set as one vengeful attack – partially – loosely based on baby’s dislike of free and selfish men which are identied in Ruth as users. The actual motive takes time to complete the circle for me at least. Ruth acts very smooth as a possible employee in a Pet Shop, where we start basically – even before the intro titles – as we visit the wildlife – caged – is that a possible motive? – with up close shots of lizards, and exotica for which the minutiae of living is also enrolled to kill (no pun intended) any a serial killer might induce.  While we move between the Nurse come Midwife who’s slightly suspecting of the difficulty Ruth may have dealing with things she only barely senses, Ruth is involved in this Police free slasher quest and pops up for her medical visits which she lays flat is poked and prodded, told about choices she has to make and stresses out when Social Workers are mentioned setting off alarm bells of adoption.  Unnamed ‘Midwife’ in our eyes should fear for her life.  The city is viewed sun shining out the hospital clinic window and untamed Ruth goes onto the next victim.

For a film to work for me it needs a component of symbolism meaning it is made with some kind of message or idea.  Inherent in this film is motherhood and giving life.  It commands a space where the maternal body is focussed on the life inside.  Into the equation comes a trauma and one actually involving a partner who is part of the child.  Transference of trauma and tragic outlook come in the shape of the unborn.  Hallucinations happen even outside chilbirth and obedience is as strong as is the fear of not taking control.  Ruth signals all the outward symbols of control but is deranged.  A fantasy has taken over.  In terms of exposing the trials of paternity and the variety of circumstances some of which deny the child life through abortion are held.  The only person who is able to control what is now part of her body is the woman and host to the life yet to reach the separation of life as a solitary being.  Into a set of circumstances a child requires love, nourishment, support and growth determined from its external cradle.  In even sense the film takes us on a course we’re the appropriate things happen in a caring society.  Withdrawl of parenthood in recognition of an incapability to raise a child in the way it deserves and warrants is seen as destructive in normal society. It is a course of least acceptance yet all kinds of situations present in the everyday to formulate and evaluate ways of bringing up orphaned, institutionalised children which are very specific and strange.  Unquestionably they are life altering for the child at the heart.  Ruth is shedding her identity by behaving as a victim casting of responsibility and is not her real self.  The extent to which she is displaced is treated here in a comedic vein.  By writing this while undergoing pregnancy herself any topics are thrown out there for us to swallow.  The strength of Alice Lowe is fixed into the story and it how it deflects from her own experience is unknown but is never far from development and it would be good to know how much she was informed about parenthood during the making of the film and any untangibles or brutal realities presented.

The casting of the film is immaculate and after a few out of focus moments, shaky handcam early doors, is very polished and with some of the mpre graphic scenes the work is in your face as slasher movies tend to be.  After the first (1 down) I looked about in shock and seeking similar reactions and they varied from open jaw to laughter to nonchalance. In the first instance the creepiness of No. 1 is ratcheted up with innuendo and you don’t quite see where it’s going.  The delivery in close confined spaces is edited extemelly well and balanced with the facial speech led story and we ponder the wildlife along with it.  We see the Scots actress Kate Dickie at one stage.  In Tom Geens Couple in a Hole she was unnervingly rich in character and bleakness and here she is playing the Boardroom executive with a cut throat (pun intended) intractable corporate kitten loving business head.  It goes on the block metaphorically speaking in a brilliantly acted and light touch subtlety acting thoroughly gripping and tense conveying a great piece of action.  There are other artful enriched performances and it is a film which is not slow and no hanging about while it progresses and materially gets worse as it is intensely an unstoppable mission.

Tread careful you innocent viewers as this is packaged as being a brilliant debut, and it is, from an actress Alice Lowe, whose versatility is on show. I can’t see the bump as a very good prosthetic – can you – did she have a baby?  We deserve to know.  So I’ll tell you she was in her third trimester, it’s a new born.  It is insightful in lots of ways and has sufficient story morality – thin but present – dispatched to have us put rationality in its cross hairs and ask could something like this happen?  Obliquely the characters have lots of positives and negatives.  Some have said Ruth is a character you have no sympathy for.  I neither sympathised nor harangued her in terms of morality as it is no more than a very advanced form of horror come slasher film and pretentious are slight if at all present.  I derived a little from it but it was in terms of directorial excellence – at times – fidgety and broken – its over the top script – the performance of some who didn’t deserve their come up pence and the unparalleled lack of pursuit for the attacker.  No sirens only the lead.  It concludes as a well rounded story with a finalality bordering on normal but it is lacking in truth.